PlayStation 4 VS Xbox One


Both released on November, 2013, PS4 and Xbox One have been competing with each other for more than half a year in the market. Many game lovers must be struggling on which to buy. In the following passage, several comparsions will be given between PlayStation4 and Xbox One.


Xbox One is bigger than PS4 in appearance. The bigger Xbox One which has more room for the air to circulate will make sure that the console will not overheat and last for a long time for use. However, the smaller PS4 also has its advantage. Small size is very suitable for those who have small or crowd rooms.


We can see from the below picture, the one of Xbox one is much more lighter than that of PS4. However, PS4 has a higher contrast footage and shows more information on texture of road surface. 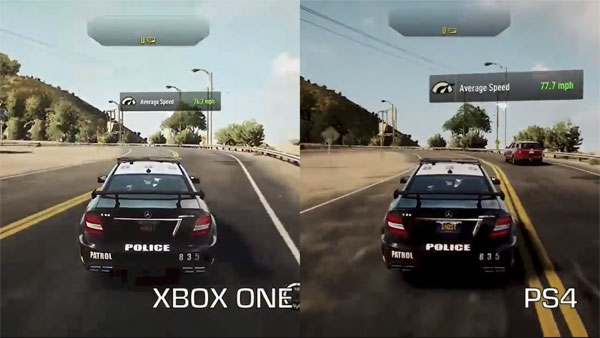 This is an exclusive feature of Xbox One. You can burn songs on your computer to CD for playing with Xbox One.

You can insert Blue-ray Disc and DVD which can stores both games and videos to PS4 for playing.

You can connect your external hard drive storing videos to PS4 through USB port and play these videos with PS4. Generally, PS4 supports playing videos of MP4 format. Therefore, if you want to play videos of other formats other than MP4, you just need to convert them to MP4 format. iTunes videos can also be converted to MP4 for playing with PS4.


AVS4Mac M4V Converter Plus is a very good iTunes to PS4 Converter which can remove DRM from iTunes purchased and rental videos and convert them to MP4 format so that they are compatible with PS4. Beside MP4, you can also convert iTunes video to other video formats like AVI, MOV, MP3 and so on or output them to other mobile devices like Apple, Samsung, Xbox 360, etc.

PS4 apparently has more games than Xbox One. But Kinect of Xbox One is also an attractive feature. Overall, it depends on what games you like and what you care most.

Note: This article is not the original source of the above chart.